TAKE A LOOK INSIDE THIS RURAL ORIGAMI-STYLE NEW ZEALAND HOME

Scott Lawrie is a writer from Scotland who used to live in Sydney but who fell in love with the raw New Zealand landscape and resolved to build a house here. At the same time as he started his search – it had to be within an hour and a half of Auckland – he started talking to architect Paul Clarke of Studio 2 Architecture.

“We sat and had a chat and he liked what we’d been doing,” says Clarke. “He’d researched what the practice was doing and we just clicked. At the time he had no site so it was sort of this conversation and journey that started in respect of this love of New Zealand.”

A few months, a couple of emails and some phone calls later, Lawrie rang Clarke to say he’d found the site: a section high on a ridge on a former cattle farm at Pakiri Beach, a wild stretch of pristine white sand an hour and 20 minutes north of Auckland, with a spectacular view out to the Hen and Chickens Islands. “So we jumped in the car and went to have a look,” remembers Clarke. “Quite quickly, the Hen and Chicks announced themselves to me as an idea, and I came back from the site and built a little model as an idea – and that was the generator alongside the conversations I had with Scotty.” 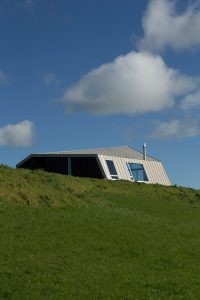 A former cattle property now reverting to native bush, the site is reached down a long gravel road off the main road, down a long driveway and around a steep escarpment. Away in front of you, over rolling hills, are the sand dunes of Pakiri Beach; to the east, a valley of regenerating native bush. It is both exposed and tucked away: you can barely see another house. The land came with a designated building platform that was reasonably defined, and a 6-metre building height limit: Clarke had to work hard to stay within that, and in the resulting plan each corner of the house touches the edge of the designated building platform.

Essentially, the house is a folded form in the landscape – very much like that first model. The roof goes up and over the sides of the house, which also slope. Tucked up into the eaves is a writing studio for Scott that looks over the living area and out to sea – a response to the (entirely contradictory) need to make the house both a convivial place to entertain friends, and a solitary retreat for a writer who needs space to think.

It’s not a big house. There are two bedrooms and two bathrooms at the front, and a big, open, double-height void at the northern end. “A whole lot of things went into it, which we pushed and pulled and squeezed to make it perfect,” says Clarke. “The plan was thought through in the beginning, but it really needed to be manipulated to fit the site. So that simple plan was not necessarily simple to build.”
It was almost an exercise in origami: there is exactly one place in the house where two walls meet at a 90-degree angle, and even there the wall follows the angle of the roof. 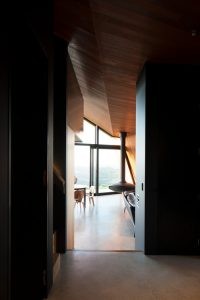 There are more tricks, as well: in a whimsical touch, Clarke created a fold in the ceiling that follows an original cattle track on the property – it leads you down the hall and out towards the view, giving the house its name, The Crossing. It’s all part of a deliberate plan to slow your journey through the building. “Everything isn’t just given to you, it’s not just presented to you in one hit,” says Clarke. “It’s about the moment: you get to a space, you turn, you look, you get something else.”

When you finally get to the very back of the house, you are presented – finally – with a wall of glass that makes the rear of the house completely open. Floor-to-ceiling glass and big openings leading out to a small terrace – and the view. Here, the timber of the interior leads out under the eaves, making the terrace feel warm and enclosed.

While the outside of the house has a staunch, almost space-age kind of feel – the interior of the living areas are clad in cedar panels, which required yet more precise building work where the ceiling meets the walls and the corners.

Throughout the house, small touches help to define the house and reinforce the thinking behind it: instead of a standard kitchen bench, for example, Clarke specified the bench be designed in the shape of the Hen & Chickens Islands, visible from the kitchen out to sea. It’s a delightful, whimsical touch in a house that is delightful and whimsical. “It was that very crafted, sculpted way of presenting the good old island bench as something a little more dynamic,” says Clarke. “You’re just having fun.” 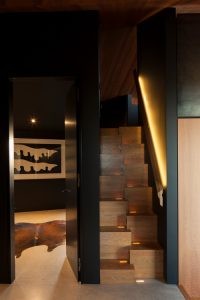 Similarly, the stairs to access Lawrie’s writing studio are offset, guiding you upwards footstep by footstep. This was made possible, Clarke says, because there are different types of stairs under the New Zealand building code – these are classed as ‘minor’ stairs because they just access one small room that isn’t a bedroom or living area. The fun didn’t stop with the stairs – the handrail repeats the island motif of the bench and the outside form. “We sliced through the section and created the handrail that related to the section of the building.”

At the same time, Clarke thought hard about windows, which define the different elevations of the house. From the driveway, the house is quite closed, while it’s open at the front. Along each side, he placed carefully positioned windows – here on the east side, there are two large windows punched in the side of the cladding, which look out to a bucolic view of the surrounding hills. One window is in the living room and gives a very different view to that of the front wall of glass, while the other – generously, I think – is in the guest bedroom.

The result is a particularly special house – one that is as much sculpture as it is home. “I get a lot of pleasure out of that and you get a lot of pleasure from Scotty with the house up there,” says Clarke. Now, Lawrie is half considering his next project – there are a few little things he wants to do, maybe even another big project. “He’s not afraid of the adventure,” says his architect. “He’s excited by it.”